It's been, what, two weeks since my last post? A while, comparatively speaking. A lot can happen in two weeks. Attending a concert [Mat Kearney], writing a few papers [political theory and Spanish], reading a few books [class assignments], finishing another season of television [Torchwood], a trip out of town to attend another concert [Fleet Foxes in DC], starting a new job [tutoring], volunteering [soup kitchen], screaming with joy when a favorite screenwriter gets nominated for an Emmy [Steve Moffat for Sherlock, obviously], turning twenty. 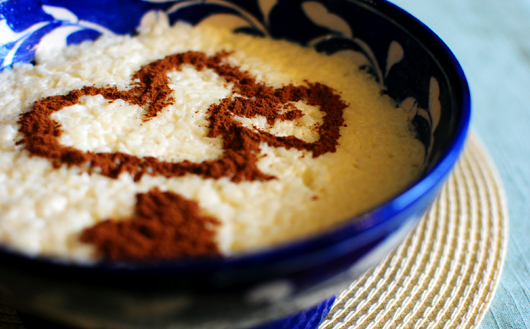 A lot can happen in twenty years.

But this isn't the time to reminisce about it.

I am, though, fortunate. Extremely so. For knowing the people that I've met, having the friends that I do, and a family that is always there. I sometimes forget it, but I'm always reminded. Particularly when I'm confronted with three different birthday cakes in the span of two days, an all-expenses paid dinner [parents are indispensable when you're in college], some meaningful gifts, and a load of well-wishes.

Birthday weekend started out like all great weekends should: a phenomenal dinner cooked by Mr. Sparta [I still dream about those mascarpone-stuffed dates...] and spectacular birthday carrot cake by Mrs. Sparta [orange-zested cream cheese frosting is such a revelation!]. I spent the beginning of the weekend in DC with Chelsea's family, Matt, Rudhdi, and Liz for a Fleet Foxes concert, and Chelsea's family graciously offered to prepare a birthday meal beforehand. The dinner was absolutely amazing, the concert was incredible, and there was tons of hilarious conversation on top of it all.

What did I say before about being blessed to have the friends that I do? 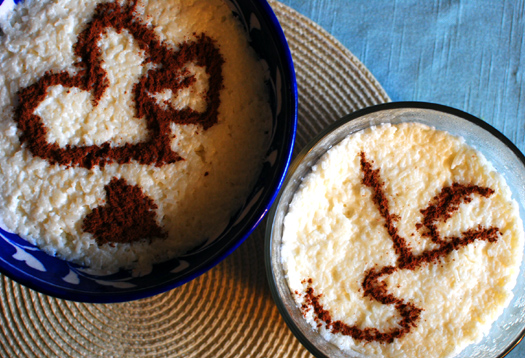 Came home Saturday afternoon, during which Farnoosh refused to let me open the fridge, as she and Tommy spent Friday afternoon baking a birthday cake for me. So I was forced to keep to the couch, having all fridge-items brought to me by Noosh, until going out for a delicious Thai dinner with Zack and Jerm in tow. Once we got home, Tommy came over and I finally got to see the dessert: an absolutely gorgeous chai cake with honey-ginger cream cheese frosting. It was beautifully constructed and tasted phenomenal in its complexity and similarity to a chai tea latte. And thus day two of the birthday weekend ended, yet again, in tummies full of sugar.

As for today, the 'rents drove in for the afternoon [as they always do] to take us out for a lunch of kebabs [as they always do]. I love the familiarity, especially since it means that mom has prepared a rich, dark chocolate torte to celebrate [as she always does]. They stayed for a while, we caught up since I hadn't seen them in over a month, enjoyed some of the cake from yesterday, and then cut into another one. And now, lying on the couch with a knit blanket, best friend by my side, flicking through channels on the new television [present courtesy of my father], and plates of cakes just eaten skewed across the coffee table, I can safely say that I am in a good place.

Twenty years old, and in a good place. A surreal feeling, but one that I think I will enjoy getting used to.


As for this dessert [because God knows that after three cakes I really just need another pound of sugar to throw me into a coma], I cooked it up earlier today before my parents arrived, and after a breakfast of leftover chai cake with milk. In the style of Middle Eastern puddings, which I love dearly, shir berenj is a Persian rice pudding. This one I've made in honor of Afghanistan, with a quite a bit of help from Noosh as well. 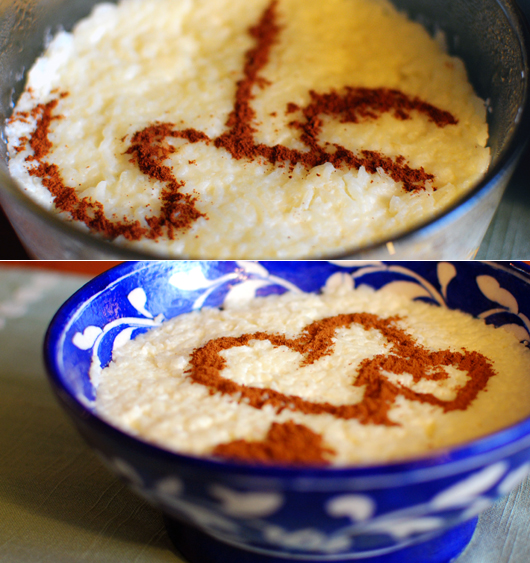 Shir Berenj
Adapted from Turmeric and Saffron, alongside some of Noosh's expertise.

Rinse and soak the rice in cool water for at least two hours (preferably overnight). Then, rinse water and pour the rice into a deep, nonstick pot. Add the water and heat over medium flame until the water comes to a boil. Reduce heat to a gentle simmer, and stir occasionally until the rice absorbs all of the water, 10-15 minutes. Slowly pour in the milk and continue stirring over low flame until the rice has soaked up the milk, 30-40 minutes. Be sure to stir occasionally as to prevent the milk from burning.

Once pudding has cooked [the rice will be soft, but shouldn't break apart], remove the pan from the heat and let the pudding cool for 10-15 minutes. Pour the pudding into serving dishes and flatten the tops using a spoon. Sprinkle cinnamon over top of the pudding. Serve immediately with honey or fruit preserves to sweeten, or cover the tops with clingwrap and refrigerate until serving. 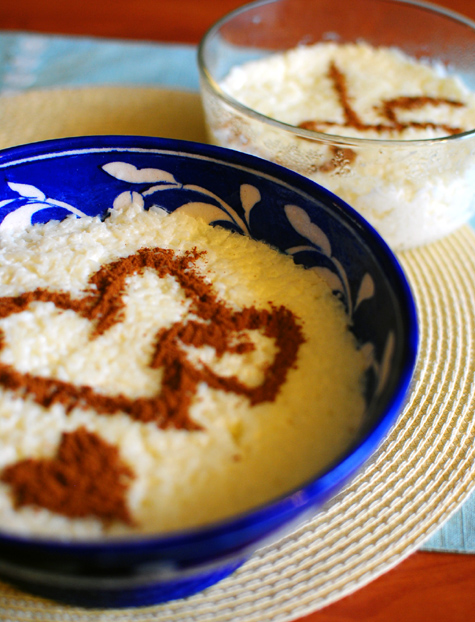 It's an easy dessert, really. Cooks for a while over stovetop, similar to seviyan, and the end result is a thick and creamy custard. Milk-based puddings are, for the most part, all made in this way: slow-cooked over a low flame for the milk to thicken to sweet, melt-in-your-mouth goodness. In other words, delicious.


You know, turning twenty has made me think about how quickly time goes by, and how much can happen in just a few years [if not two weeks]. But perhaps it's time to stop thinking about time. Time means that these cakes won't last forever. And that means that I'll have to stuff my face now and savor each moment.
Posted by Sabeen at 7:49 PM