I can officially post! Literally, I've had this sitting in my pending posts since this past weekend.

No, I am not pathetic, I just like to write before I forget the recipes [read: too lazy to have to look them up]. 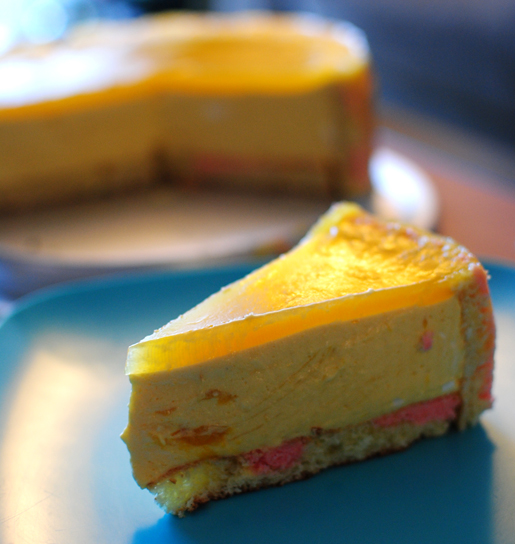 My culinary life has taken quite a turn. I make that out to be much more dramatic than it actually is, but I am quite excited about it. I've finally joined one of the most revered blogrolls in culinary cyberspace. The Daring Bakers, to be precise.

Towards the end of December, I joined the Daring Bakers, one of two "chapters" of the Daring Kitchen blogroll (the other being the Daring Cooks). At the start of every month, the Daring Bakers reveals a Challenge Recipe that all members of the chapter are to bake and post on their own blogs on the 27th. This month, my first official month as a Daring Baker and my first month participating, the recipe challenge was for biscuit joconde imprimé, which I filled with a mango mousse entrement.

You know those gorgeous little, cylindrical layer cakes you see in pastry shop windows? The ones with decorative "wrappings" around them, designed with intricate patterns and colors? Filled to the brim with mousses, puddings, cheesecakes, Bavarian creams, and the like? Turns out, it's not an impossible feat. A difficult one, yes, but not impossible. 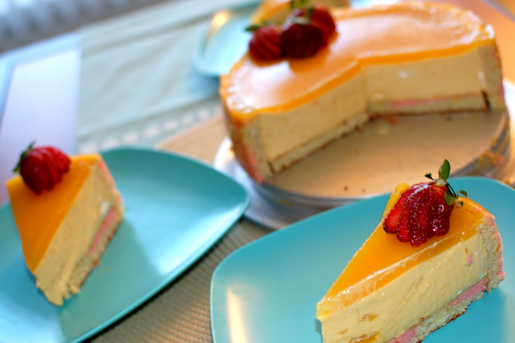 Biscuit joconde imprimé is a light, almond spongecake with a decorative design baked into it. The joconde batter is baked in thin sheets, and its flexibility allows the pâtissier to use it to line the outsides of Charlottes or mousses. [Incidentally, "La Joconde" is the French name of the Mona Lisa]. Entrement, a French term literally meaning "between servings", refers to a small dish served between courses, or more commonly, a dessert dish. As a dessert, entrements are layered cakes alternating numerous layers of spongecake or génoise and pastry cream. So, when put together, the joconde imprimé serves as the outer "wrapper" of the entrement filling.

This recipe has a few components, but is also extremely flexible, insofar as what entrement you choose. There's the joconde paste [or pâte à cigarette, as I've seen it called as well], the joconde sponge, and the entrement [which in my case consisted of a mango mousse and a mango mirror]. I'm not going to lie, there were some...complications when I made this. Long story short, three hours, 20 eggs, two do-overs, and one still somewhat dissatisfied novice baker later, the joconde was done. Just the joconde. The mango mousse, made the day after with the help of my favorite sous baker, Tommy, took another few hours [though this includes chill time]. Overall, though, as unexpectedly time-consuming as this turned out, I'm glad it was the challenge recipe. I would never have learned how to replicate those gorgeous little cakes otherwise.

Not that I have the skill required to replicate those, by any stretch of the imagination, but it at least gives me some direction. And another opportunity to bake with friends. And for my mother to snicker at my culinary inadequacies. Everyone wins! 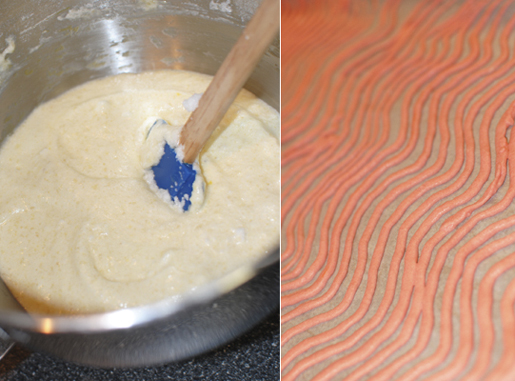 For the joconde paste, you'll need:
*as a note: I've adjusted the joconde paste recipe to halve the one given in the challenge post. This is because the ratios used in the given recipe yielded more than twice the amount of paste I needed, even after redoing the joconde imprimé.

For the joconde sponge, you'll need:

Line a 13x18-inch [I used an 11.5x17.5-inch] pan with a sheet of wax paper and set aside. Do not preheat the oven yet, as the following will be a somewhat lengthy process.

Begin by making the paste. Cream the butter and sugar until smooth and fluffy. Gradually add in egg whites, beating continuously. Fold in flour and cocoa, if using. If not using cocoa, fold in flour and tint the batter with a few drops of whatever food coloring desired. If not using joconde paste immediately, paste keeps well in an airtight container for up to three days. Otherwise, proceed with the decorating.

There are two ways to go about decorating the joconde sponge. 1) Spread the paste thinly over the wax paper, and use a knife, pastry comb, spatula, or your fingers to draw designs. Otherwise, 2) Use a piping bag to pipe designs all over the wax paper. [I transferred the paste into a ziplock bag and clipped a corner to use as a make shift piping bag]. In any case, once the design has been drawn on the wax paper, place the pan in the freezer until the paste hardens, at least 15-20 minutes.

While joconde paste is hardening, begin preparing the joconde sponge batter. Preheat oven to 450 degrees Fahrenheit [if using a dark pan, reduce heat to 425]. In a clean, dry bowl, whisk egg whites on medium-high speed until they begin to get frothy [if using a stand mixer, be sure to use the whisk attachment]. Slowly add in the granulated sugar and continue whisking on high speed until stiff peaks form. Set aside. In another bowl, combine almond meal, confectioner's sugar, and cake flour. Add eggs, one at a time, blending until a smooth batter forms. Add in vanilla and mix until incorporated. Gently fold in 1/3 of the egg white mixture to lighten the batter, before folding in the remaining egg whites. Finally, fold in melted butter. Do not over-mix, or egg whites will deflate.

Once joconde paste has hardened, remove pan from the freezer. Slowly pour the sponge batter over the paste, smoothing it evenly with a spatula. Bake for 6-7 minutes, until sponge is just beginning to brown. The sponge bakes extremely quickly, so be alert. Once baked, allow spongecake to cool for about 5 minutes before removing it from the pan. Invert the cake onto a sheet of wax paper so the decorated side is facing up.

Now, prepare the mold. Decide what size you want your joconde to be. Typically, they're rather tiny, so mini springform pans would be ideal. Unfortunately, I didn't own any at the time [I have 4 coming in the mail soon!], so I went with an 8-inch springform. Line the walls of the mold with parchment paper [this will prevent the spongecake or filling to stick to the pan while it's chilling]. Once you've readied the mold, cut the cooled joconde sponge into strips to line the walls of the pan, against the parchment paper. Make sure the layers fit tight against the wall; you don't want them resting loosely or the entrement won't chill properly. If desired, cut out a piece large enough to fit into the base, or bake a separate sponge cake to use as layers. Set the prepared mold aside.


Now, decide on what to use as your entrement. I used a mango mousse and mirror, but any sort of cheesecake, mousse, Bavarian cream, or pudding would work, so long as there is enough gelatin or cornstarch to help it keep its shape. Once the entrement is done, pour it into the joconde, layering it as desired. [I just filled the entire joconde with mango mousse, though in future I would like to do alternating layers of spongecake and mousse.] Chill the joconde long enough for the entrement to set, usually 4-5 hours, and remove from the pan when ready to serve. 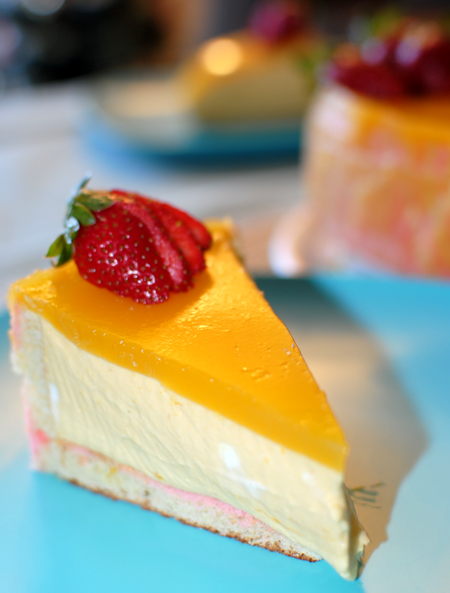 Hm. I didn't love the way mine turned out. The sponge cake was sloppy, and my technique was off since I wasn't quite sure what to expect. And my imprimé, despite having baked quite well, came out rather shoddy, since the mirror dripped down the sides of the spongecake walls before it was able to set, and consequently the walls stuck to the sides of the pan.

I was, however, pretty satisfied with how well the mango mousse and mirror held up. Tommy was a huge help there, and provided emotional support when I was positive this entire thing was going to fall apart at the seams. It also tasted quite good, according to him and Matt, which I suppose, in the long run, is all that matters.

Overall, not one of my best cakes, nor one that I'm super satisfied with, but once those mini springforms come in, I'm positive I will be attempting more of these. I'm feeling a chocolate espresso mousse cake next... 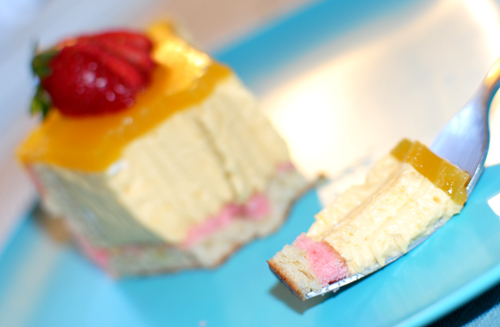 In other news, not quite sure why promises of snow keep failing us here in Cville. It's getting highly distressing. I mean, I just want to curl up with some coconut Oolong and my new mug and not have to go to class. Is that so much to ask?
Sabeen at 1:00 AM
Share