Today is Yusra's sweet sixteen, and I'm home for the weekend for Fall Break. So, because I love my baby sister, and because I love baking, I decided to give myself a bit of a challenge and shoot for a 16-layer cake.

I mean, no big deal.
﻿
She actually had a little sleepover yesterday with some of her friends, and mom had made her a cake for that. She used my 1-2-3-4 cake recipe and a simple buttercream frosting, but it was an absolutely beautiful cake. I was reminded once again of how my baking skills pale in comparison to hers.


She didn't have a Hello Kitty mold [do they even make those?] so she craftily made a large circular cake and cut it proportionate to Hello Kitty's face and added ears and a bow to the top. It was so cute, and consequently extremely painful to cut into.
﻿ 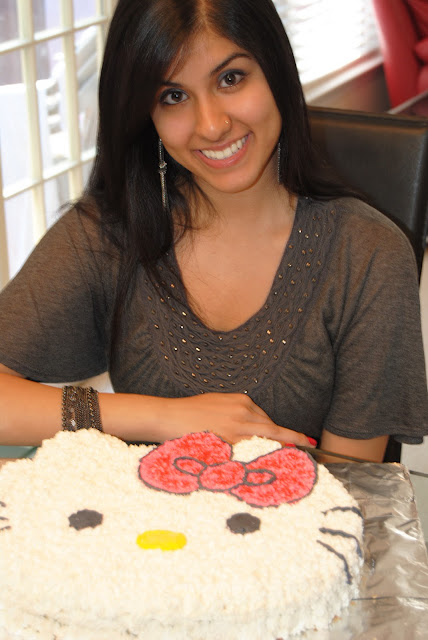 ﻿
Anyway, on to my cake. I've actually made a 14-layer cake in the past, which turned out to be quite successful. But I was a little worried about the 16-layer, because I had to tweak the ratios of the cake batter so I'd have enough. I'll type up the recipe that I used, but note that this recipe makes a 16-layer cake. Do not make it if you want a regular layer cake, or you will have so much batter on your hands you won't know what to do with yourself.

For the cake, you'll need:

Note: the frosting is twice what is necessary for a normal, 2-layer 9-inch cake. If you want to use it in a regular-sized cake, halve the frosting recipe.
Note: Instead of using a spring form cake pan, I used 8 tin foil cake pans, each of which I used twice, of about 8.5 inches in diameter. This makes it much easier to get even layers, and completely cuts out the hassle of having to cut the layers yourself. I got the idea from bakerella.com, and it is pure genius. 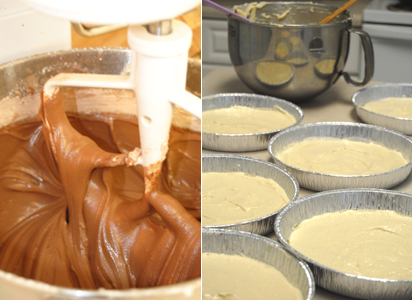 To make the frosting, in a mixing bowl beat the cream cheese, butter, and milk together until smooth, using the paddle attachment. Add the sugar, cocoa, and salt and continue to beat until blended. Reduce the mixer speed to low, add vanilla, and beat until combined. Cover and chill for at least 30 minutes before using.

Note: frosting can be made in advance, as it will keep well in the fridge for up to 3 days.

To make the cake, preheat the oven to 350 degrees Fahrenheit. Cut 16 pieces of parchment paper the circumference of the tinfoil pans, press on the bottom of  each pan, and grease the pans. Sift flour, baking powder, and salt. In a mixing bowl, beat the butter and sugar until light and fluffy, about 3 minutes. Add eggs, one at a time, and beat until smooth. Reduce mixer speed to medium-low, and alternate between adding flour and milk, beginning and ending with flour. Add vanilla and mix until just combined. Don't over-mix.

Pour about 3/4 cup of batter in each pan. Bake for about 13 minutes. My oven fits 4 pans on each of its two shelves, so after the first batch was done, I removed the cakes, relined the pans, and baked the second half of the batter using the same 8 tinfoil pans.


Once the layers are cooled, begin assembling the cake. Spread a little bit of frosting on top of each layer, using enough to barely cover the layer. Needless to say, you don't want to over-frost the layers, or you will run out of frosting. Frost the top and sides evenly. Decorate as desired, and refrigerate  until ready to serve.
The hardest part about this cake, to be honest, is the assembly process. Mainly because you have to make sure your cake doesn't turn into the Leaning Tower of Pisa. It should hold up relatively well, though, if it's balanced properly. 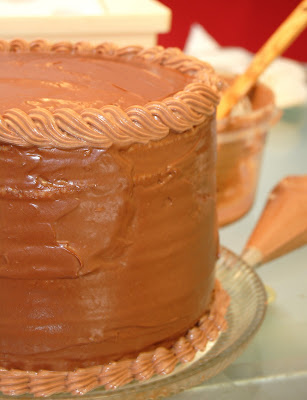 After I finished frosting the cake, I wanted to do a shell border around the top and bottom. Unfortunately, I didn't have enough frosting to do so, so I combined about a cup of leftover buttercream frosting from yesterday to the chocolate cream cheese, thus resulting in the lighter shade pictured above. Had I wanted to, I could have melted some chocolate or added some cocoa powder to darken it to the same shade as the cake, but I kind of liked the contrast. So I left it.
A few months ago, I had attended cake decorating classes. Honestly, the classes were kind of useless, but it gave me an excuse to make sugar roses. Which keep disturbingly well for, basically, forever. Mom had saved mine from this past summer [they keep at room temperature in the pantry for months, as long as they're in an air-tight container], and told me to use them on the cake. So I took about half a cup of buttercream frosting, dyed it green, piped some leaves, and stuck some roses on the top of the cake. 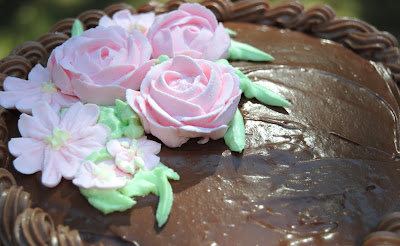 Not quite as pretty as the ones I used on my mom's birthday cake a while back, but nice enough. 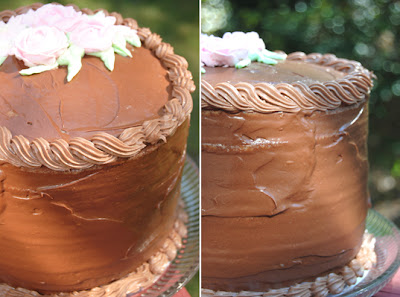 It took every ounce of patience for me not to go ahead and cut the cake myself so I could see if the layers turned out alright. But no, I had to wait five freaking hours until dinner. *sigh* Oh, the suspense.
But, worth the wait. Everyone gathered around, waiting in anticipation for the first cut. I was pretty much bouncing on the balls of my feet. I had mom cut it for me, because I trust her much more with slicing an 8-inch tall cake than I do myself. 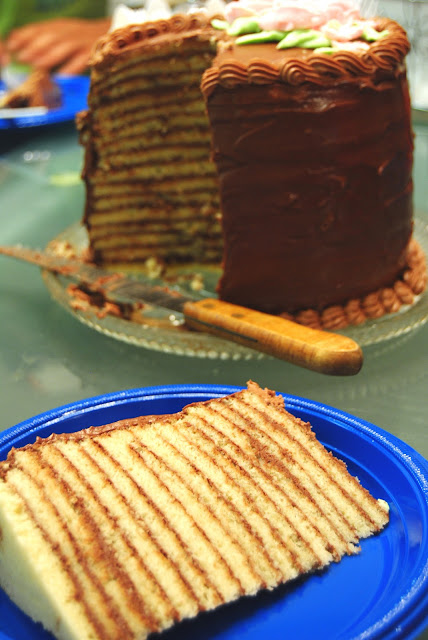 Perfect. I was ecstatic. Everyone loved it! Such a success. Most importantly, Yusra's eyes lit up and she broke into a grin when she saw the layers. And that really is the best thing about baking; seeing others' reactions to something you've made them. It's why I bake. And love every second of it. 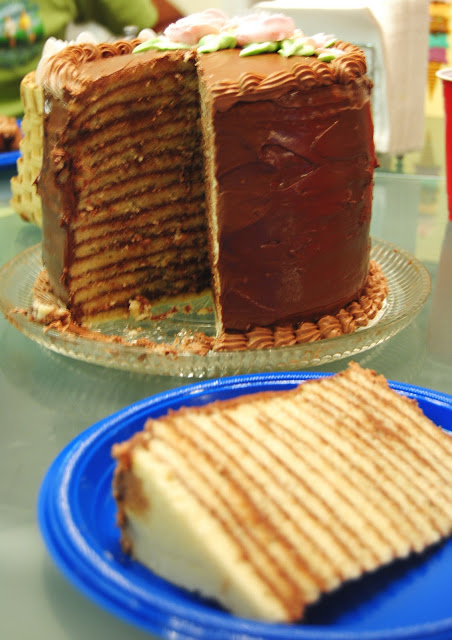 In other news, I've had cake almost daily for the past 3 weeks. This is the problem with having Eid, my birthday, and my sister's birthday so close together. I actually think I will die if I eat any more.
So, it may be time to put away the baking pans for a while, lest I want to gain the sophomore 15 before winter break even starts. Damn. Ugh. Why are all things delicious so bad for you?!
Posted by Sabeen at 5:10 PM