I have to say, Harry Potter land did not deter me from my everyday routine of (1) playing the piano for hours on end, and (2) baking. It helps that the last of the three December birthdays was on the 26th, and so I knew that the first thing I would have to do as soon as I got home would be to bake Hannah a belated birthday cake. 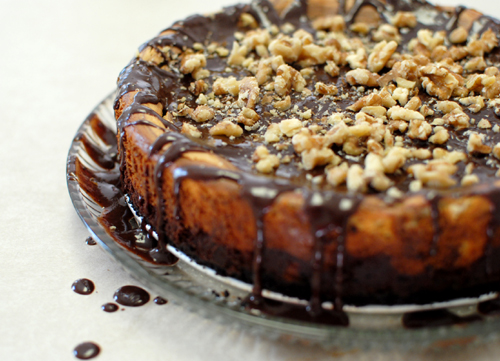 We spent all of yesterday driving home from Orlando. It ended up being a 15-hour car drive [we got delayed for an hour in traffic, and had some minor car issues in the morning that resulted in us needing to replace the rear two tires], and we snacked on fast food, granola bars, and apples. It was very strange ordering 6-piece nuggets from McDonalds, knowing full well that they're made out of more corn product than actual chicken, and my tummy is still suffering the after effects.

In all honesty, though, they were...really good. In that "I'm seriously going to regret this later" kind of way. But I can't lie and tell you that I did not thoroughly enjoy those deep-fried, extremely sketchy, "chicken" nuggets. Our diet starts tomorrow, though, right? Right.

Anyway, we got home by 9:30, regaled our parentals with extensive details of our trip for a good hour, and then crashed. I was woken up far too early for comfort though, and realized that I must have not turned off my cell's alarm for 5 am from the day before. 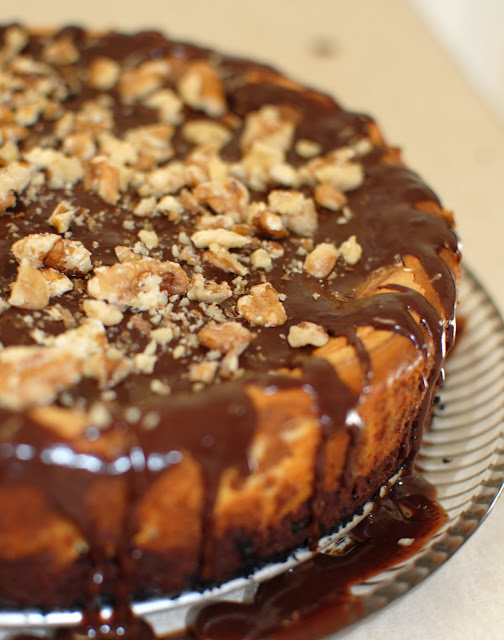 Not so. It went off at 9, which is when I intentionally set it, so that I'd have enough time to bake. I don't think many people would set an alarm to wake up to bake a friggin cake.

As much as I wanted to bury myself in my comforters and keep sleeping for an additional 10 hours, I dragged myself out of bed, brushed my teeth, softened some cream cheese, and got to work. 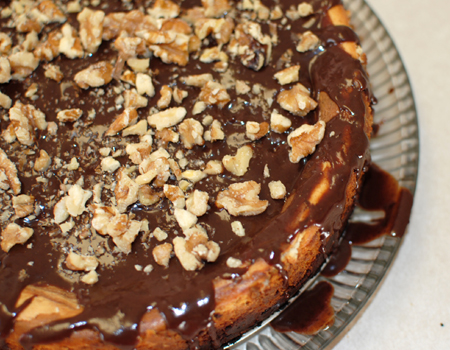 To be fair, I make this all sound as though it was a chore. On the contrary, having to wake up 'early' in order to bake a cake is totally fine by me. Plus, I wasn't even sure this was going to work out well. Cheesecake is typically a two-day affair, because it has to chill so that the filling sets appropriately. But Hannah loves cheesecake, so I knew from the start that this is what I was going to bake. And although I was originally planning on having more than 4 hours to bake it, it turned out fine in the end.

But this isn't something I recommend. In fact, I'd suggest you bake this the day before you plan on serving it, just so you aren't rushing or stressing. Stress is the worst way to go about making a cheesecake. It will just fall apart. [I have a theory that baking is highly responsive to whatever emotional state you're in when you go about it. Don't ask.] 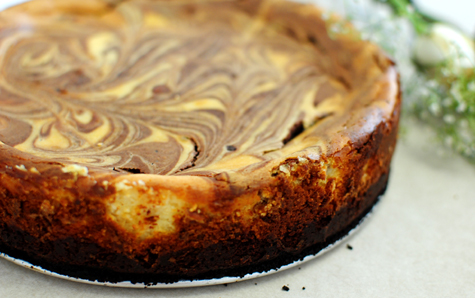 For the Oreo crust, you'll need:

For the filling, you'll need:

For the chocolate ganache, you'll need:

Preheat oven to 350 degrees Fahrenheit. Grease and flour a 9-inch springform pan. Use a food processor to grind Oreo cookies into fine crumbs. Pour melted butter into crumbs and mix with a fork. Pour crumbs onto the bottom of the pan. Use your fingers to spread the crust evenly across the pan. Set aside.

To prepare filling, beat cream cheese on medium speed until creamy. Add sugar and cornstarch and blend. Add eggs, one at a time, until fully incorporated. Add sour cream and vanilla and mix until well-blended. Set aside.

Bake cheesecake for 50-60 minutes, until center has set. Check doneness by poking center with a toothpick. Let cool completely, until cake is at room temperature. Cover the top of the cake [which should still be in the pan] with plastic wrap and refrigerate for at least 4 hours, preferably overnight, before removing cake from the pan. Decorate as desired, or serve as is. 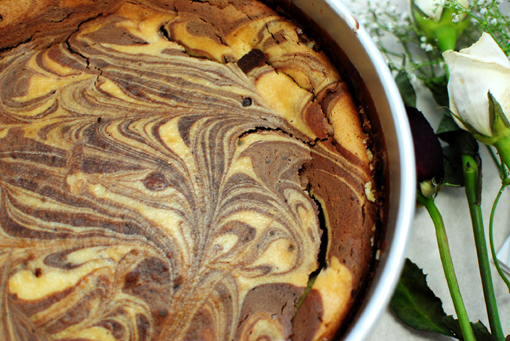 Okay, so, I have some confessions to make regarding this recipe. First of all, the recipe I used was to make triple chocolate cheesecake bars. Meaning, it was to be baked in an 8-inch square pan. But, I could not locate our square pan, so I went with the 9-inch springform and decided to just make a cake. However, if you prefer, you can absolutely turn this into a bar dessert recipe; just bake it in an 8-inch square pan and cut it into rectangles once it has set.

Thirdly, I did not use a water bath. Now, you should always use a water bath when baking a cheesecake, as this prevents cracks from forming. [The way to go about baking cheesecake in a water bath is using a pan that is large enough for the springform to fit inside, filling it halfway (in regards to halfway up the sides of the springform pan) with warm water, and baking it in that. This makes sure the cheesecake bakes evenly throughout, and greatly decreases the likelihood of cracks forming.] Anyway, the reason I didn't use the waterbath was because I had already decided I was going to do chocolate sauce and crushed walnuts on top. [Also, I'm really lazy.] 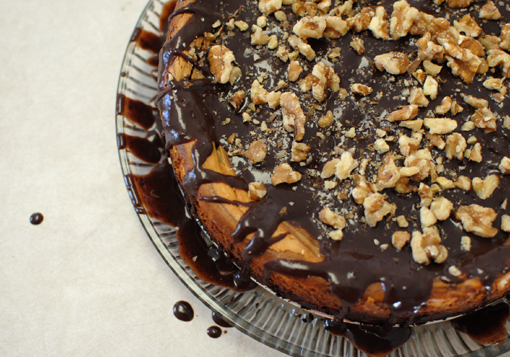 Oh man. This was sweet. Like, ridiculously sweet. We cut pretty tiny slices [I'd say about 1/16 of the cake], and upon finishing I was feeling a sugar headache coming on. It was really good, though. But, I'd have to say, I'd only recommend it if you're a big fan of cheesecake and a huge fan of chocolate. It is the chocoholic's dream cheesecake. But for someone without much of a sweet tooth...I foresee it going badly.

Luckily, Hannah is both a cheesecake-lover and a chocoholic. And she really enjoyed it. Cake #3: Success! 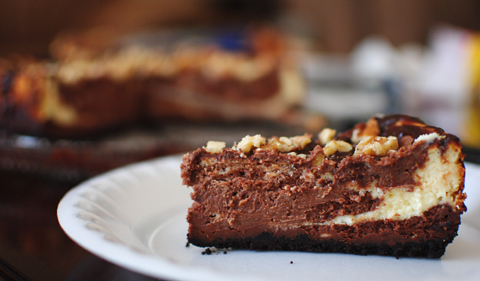 Hm. This was the first cheesecake I've made in a long while. As much as I adore cheesecake, I still haven't discovered a recipe that I'm in love with. This one was pretty damn good, not gonna lie, but a bit too rich for me to fully enjoy it. Maybe mascarpone cheese is the answer? Or ricotta? I haven't done much with ricotta or mascarpone in the ways of cheesecake, so that's something to look into... 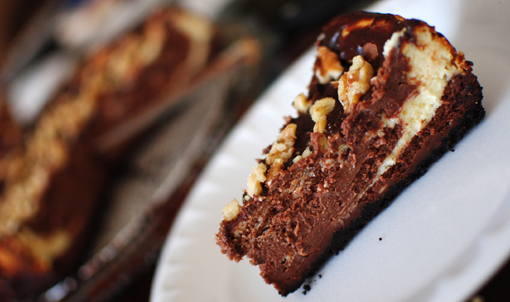 Really? Today? One day after we leave?

When I heard, I almost cried. I kid you not. Imagine, I could have been kickin' it with Draco, Ravenclaw scarf and all, drinking Butterbeer and riding roller coasters.

The incredulity and utter irony of the situation blows my mind.

Though, I suppose, I was lucky enough for the opportunity to go at all. And it was magical. And that's more than enough.