It's that time of year again. The time of year when I wake up not wanting to get out of bed; to stay bundled up in layers of blankets against the chill of the morning. When kitchens smell like pie crust and nutmeg. When I can wrap myself up in a thick pashmina and tuck my jeans into sturdy boots. When I want nothing more than to curl up on the sofa in an oversized sweatshirt with a mug of tea. Pea coats and wool hats. Apple-picking and pumpkin patches. Cinnamon latte mornings and lentil stew evenings.

It's also the start of birthday season. My own was last week, and just four days later my dear friend Beth turned 20 as well. She has a rather large sweet tooth and appreciation for delicious things, so we get along swimmingly. Though we don't have a chance to chat very often [we live far apart and have hugely different schedules, despite attending the same school], a lunch-date of iced coffee and Thai curry is always enough to catch-up.

And, of course, I knew I'd be baking her something for the occasion. 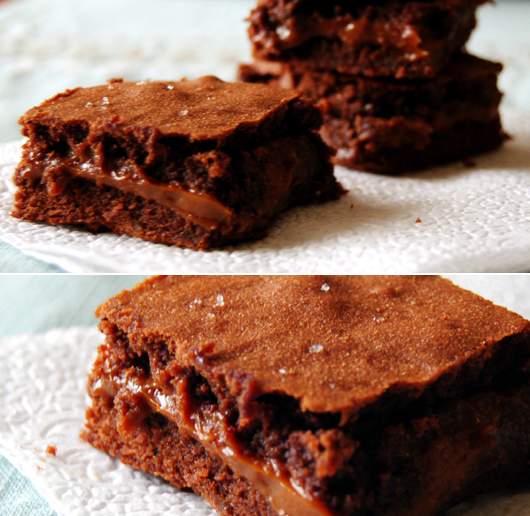 I also haven't baked anything in quite a while [all the Middle-Eastern desserts lean more toward the stove-top cooking end of the spectrum], so I wanted to make sure it would be quite good. I settled on two of the greatest things in the world: dulce de leche and brownies. Salted, of course.

Preheat the oven to 350 degrees Fahrenheit and line and grease a 9x13-inch pan. 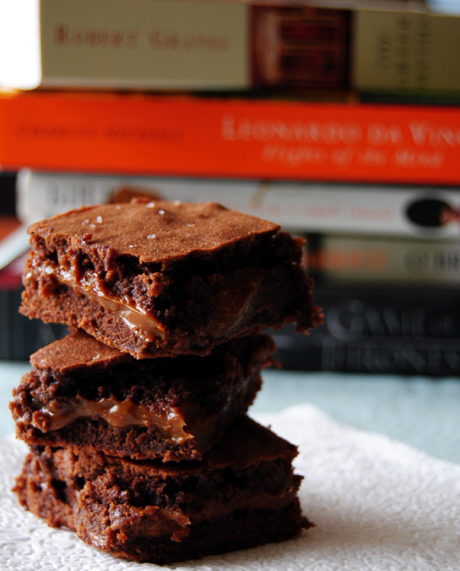 These are fan-flipping-tastic. I love the cake-y texture, which is odd since I typically prefer the fudgier variety. The salted dulce de leche offsets the sweetness of the brownies perfectly. A good, chocolate-y, fall dessert, and a nice source of comfort after the anti-climactic resolution that was the series 6 finale of Doctor Who.

Though I think pumpkin will need to make an appearance in my kitchen quite soon.

Yes. Definitely pumpkin. Pumpkin and ginger. I think that's a rather comforting combination. It'll be a nice addition to a week spent watching Merlin on Netflix studying for midterms.
Posted by Sabeen at 7:07 PM