I've been MIA the past few days, which is understandable, seeing as I've been in Orlando. At the Wizarding World of Harry Potter, to be precise. 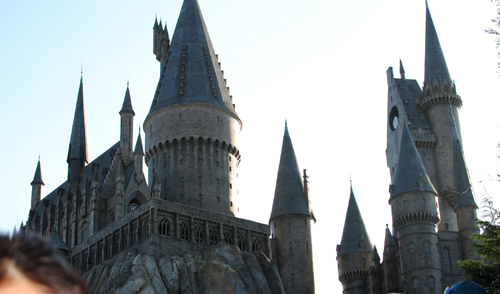 I've been waiting for this for about 6 months.

In fact, I almost had a massive panic attack when we stepped foot into Hogsmeade because I was so excited. 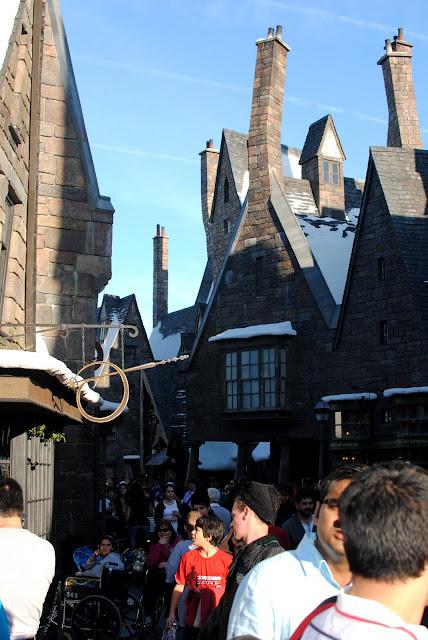 I'm still here, actually. We'll be heading back on the 27th, but it's been a really amazing trip as of now. Four-day tickets to Universal Studios and Islands of Adventure, along with checking out some of downtown Orlando, has made for an exciting two days so far. I'm also falling in love with the city. It's much cleaner and quainter than I thought it would be [and a nice contrast to Richmond].

We checked out a Parisian joint for lunch [not really authentic, but some of the menu items had French titles and it was called 'Paris Bistro', so, what the hey], and it was so cute. Made me want to live downtown forever.

We strolled down Park Avenue for a while, since the weather was so gorgeous and it was so adorable, and came across the best tea and spice store [aptly called 'The Spice & Tea Exchange'] I've ever been in. Picked up some coconut Oolong for myself, and I can't wait to go home and brew some. 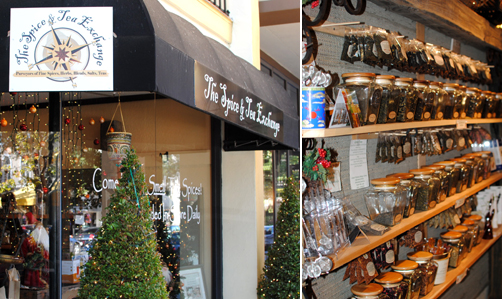 
In short, it is epic. They've done a phenomenal job with the place. Hogwarts castle itself is really well done; you can't enter it aside from the 'Forbidden Journey' ride [which is amazing, by the way], but the real focus of the area is Hogsmeade village. And it is, for lack of better words, and pun entirely intended, magical.

We visited it for the fist time yesterday, and, like I said, I almost cried tears of joy. Snow-topped roofs, buildings of all shapes and sizes clustered together cozily, cobblestone streets, Butterbeer stands around every corner, familiar shops, British accents. It is perfection.

Our first stop was, of course, Honeydukes Sweets. Which, upon entering, you find out is combined with Zonko's Joke Shop. It was delightful. And colorful. And delicious.

I felt what I assume 7-year-olds feel when they unwrap Christmas presents. Times a hundred.

Of course, I had to buy something. So I went with a cauldron cake. Which was delicious, might I add. Mustafa bought a pack of Bertie Botts Every Flavor Beans [and, let me just say, they were all fine up until I got sausage, ear wax, and rotten egg, all of which made me want to spit the crap out right there in the street and cut my tongue off], Murtaza got a chocolate frog, and Yusra picked up some pumpkin juice.
Zonko's was quite cute as well, though I didn't end up purchasing anything from there. The cauldron cake was pricey enough as it was [only at Harry Potter World would I willingly spend obscene amounts of money on overpriced souvenirs and treats]. So we bought our goodies, made our way back outside, picked up some Butterbeer, plopped down along the wall next to the Three Broomsticks, and enjoyed. 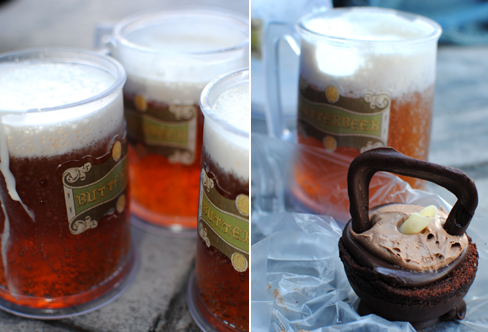 Ah, yes, Butterbeer [capitalization necessary]. Where do I begin? It is incredible. I didn't really know what to expect, in terms of quality, especially because I've tried [and epically failed] to make up my own butterbeer [not capitalized] recipe. I'm still not quite sure how they make theirs, but it tastes like carbonated butterscotch with a cream soda foam on top. It is just so good. Not too sweet, either, which I think is very important. Surprisingly filling, though. And it seems to warm you up from the inside, despite it being unheated. We got ours in little souvenir mugs, so I'll spend a good chunk of next semester trying to duplicate this recipe and serve it to myself in my little 'Butterbeer' mug. 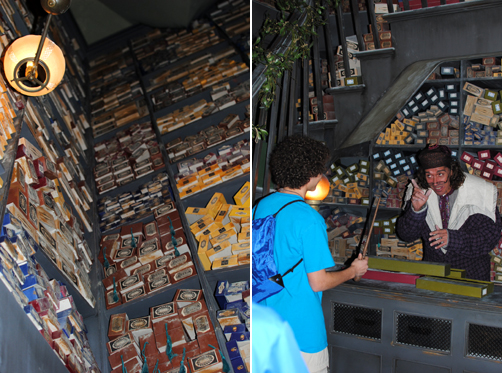 Then, Ollivander's Wand Shop. Boxes, upon boxes, upon boxes of wands. The room that we were in [after waiting in line outside for about 70 minutes] was dark as night, and combined with Ollivander's soft-spoken, whimsical voice, it was a somewhat surreal experience. It would have been more surreal if he had selected me instead of Joey up there to give a wand out to, but still enjoyable. After his little skit, we got to browse his shop, which is combined with Dervish and Banges.

So many souvenirs! And so many wands! You have the option of purchasing a character wand, which are designed to mirror the wands used by specific characters in the movies, or you can give your birth month and date to a wizard who uses a Celtic calendar to select your wand. So, of course, we all opted for our own unique wands.

Needless to say there will be a lot of wizards' duals happening in the near future.
I also picked up a gold-plated Time Turner necklace. Basically, I saw this thing, my eyes went as wide as saucers, and I knew I had to have it. Like my life depended on it. Ever since reading Prisoner of Azkaban 10 years ago, I've thought that a Time Turner would be the single most useful item ever created. And have longed for one. Think of all the useless classes I could take for the fun of it! [Politics of Food conflicting with Stats? PSHAW.].

Ahem. Sorry about that. There are few things that I am disturbingly passionate about. Harry Potter happens to be one of them. 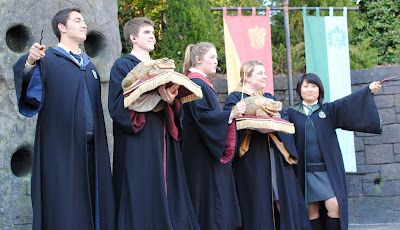 Throughout the day, a bunch of Hogwarts students will put on performances, and over the course of our visit, once our feet were about ready to fall off, we plopped down at this little pavilion to watch. We ended up watching two: The first was of four Hogwarts students [and two toads] singing a bunch of tunes. Two were actual instrumental soundtrack pieces from the movies, and the other two were lyrical. All four were really good; the students had incredible voices, which meshed well with the toads'. Definitely a different take on acapella from what I've heard in the past.

The second performance was of the Wizarding School Spirits, i.e. the lovely ladies of Beuaxbatons and the proud sons of Durmstrang. 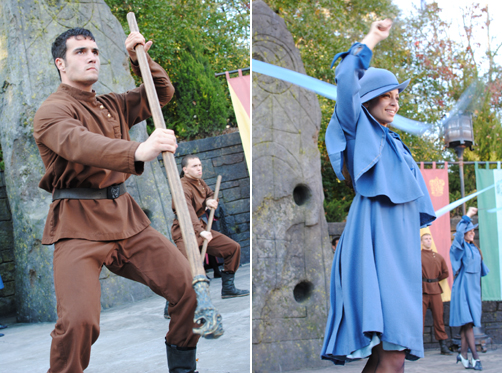 Both groups did a really stellar job, particularly the Durmstrang boys' dance/gymnastics routine. And had they been selling the Beauxbaton's robes anywhere in Hogwarts, I would have bought a pair in a millisecond. It was a really pleasant break, watching both performances in the gentle breeze of the Florida winter. My feet were highly appreciative, as well.

Like I said before, our first day at Hogwarts was really crowded. Like, hardly-enough-room-to-move crowded. Today, though, there was significantly less traffic. Likely because it's Christmas Eve and lots of people are off visiting family, and it was really peaceful at the park. We drove over late in the afternoon and stayed until after dark, which was quite a treat because all the Christmas lights and lampposts brightened the night. And my new Ravenclaw scarf kept me warm enough when the chill set in. 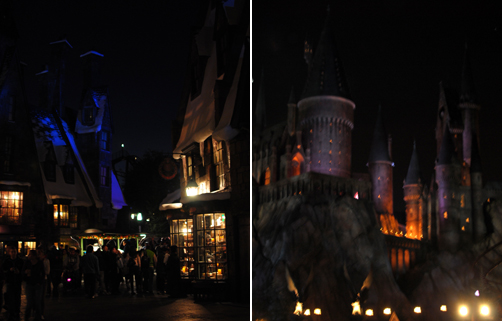 We'll likely be going back to the parks tomorrow and the day after, at least for a while. We haven't actually been to Universal Studios yet, as we've spent all our time at Islands of Adventure [at which 80% of our time has been devoted to Harry Potter World], so we'll check out the other park, eat at Hard Rock, possibly take a hot air balloon ride, and wander about in the warm weather before heading back up north.

As a side note, those enormous turkey legs that I'm sure you've seen showcased on some Food Network holiday special [because I like to think that I'm not the only person who does this] are actually really tasty. And enormous. But really tasty. If you come down to Universal or Disney World at some point, get one. It will not disappoint.

Aaaand now that I've ramble for far too long about my little vacation, I will end this unnervingly lengthy post. 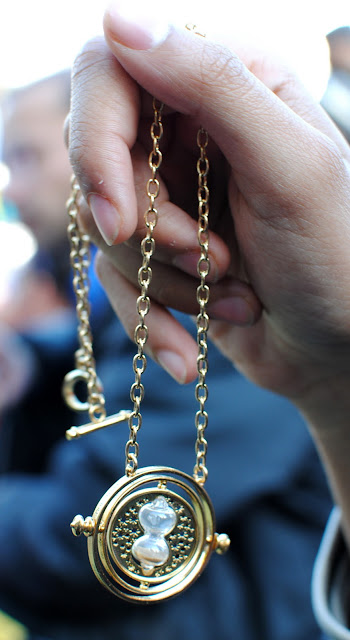 Maybe if I wish real hard, the Time Turner can take me back. Right? Right.

Happy holidays, everyone! I hope it's a magical time of year for all of you, too.
</cheese>
Posted by Sabeen at 10:14 PM