I have a confession.

I may be a little bit obsessed with finding the perfect cheesecake recipe. A little bit. 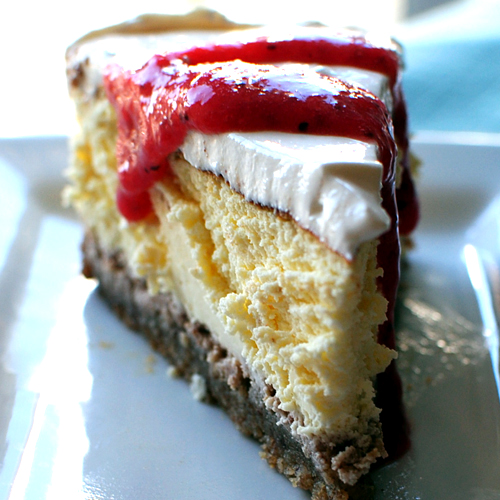 I'm not sure what it is. My perfectionist tendencies? Perhaps. An obsession with cream cheese? Definitely. The desire to know for certain that it is possible to eat a delicious cheesecake outside of the realm of the Cheesecake Factory?

Let's be real: I don't have $7 to spend on a slice of cheesecake whenever the craving strikes. So, yeah, that's probably it.

Not that the Cheesecake Factory isn't delicious; I one day hope to make a cheesecake even half as beautiful and exquisite. One so decadent that you won't be able to finish an entire slice. The possibilities are endless. 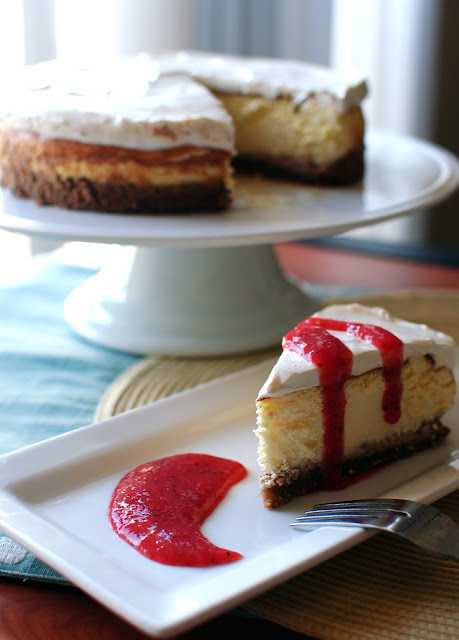 Unfortunately, my free time is not. So rather than being able to bake a devil's food cake layered with marbled cheesecake slices topped with a bittersweet chocolate ganache, I settled for a simple sour cream cheesecake.

My last attempt at cheesecake, I tried ricotta. And it was divine. This one's pretty delightful as well, though I'm thinking I'm more of a ricotta fan than a sour cream fan, when it comes to cheesecakes. The recipe comes from Alton Brown, and I topped it off with a simple sour cream layer [mainly for the aesthetic effect]. Also served it with some pureed strawberries that I needed to get rid of, with a hint of balsamic vinegar whisked in. Both the sour cream topping and the strawberry compote are totally optional, and can be substituted [sour cream bourbon topping? blueberry compote? chocolate glaze?] or omitted.

For the crust, you'll need:

For the filling, you'll need:

For the topping, you'll need:

If fresh out of the oven, allow cheesecake crust to cool while preparing the filling. Lower [or preheat] oven to 250 degrees Fahrenheit.

To prepare the filling, beat sour cream for 30 seconds on medium speed with the paddle attachment. Add in cream cheese and beat until smooth. Add in sugar and vanilla and cream for 3 minutes. In a separate bowl, whisk eggs, yolks, and heavy cream. Slowly pour egg mixture into cheesecake batter and mix until fully incorporated.

Pour cheesecake filling into cooled crust. Bake for 60 minutes, or until the cheesecake is pulling away from the sides of the pan slightly. The center should still be jiggly. Turn off oven and open door for one minute. Close and let cheesecake cool in the oven for another 60 minutes.

Meanwhile, prepare sour cream topping by thoroughly mixing sour cream, sugar, and vanilla until smooth and blended. Pour sour cream topping on top of cooled cheesecake, leveling with a spatula. Without removing the sides of the pan, cover the top of the cheesecake with plastic wrap and refrigerate for at least 6 hours.

Serve with berry or chocolate sauce, or enjoy plain. 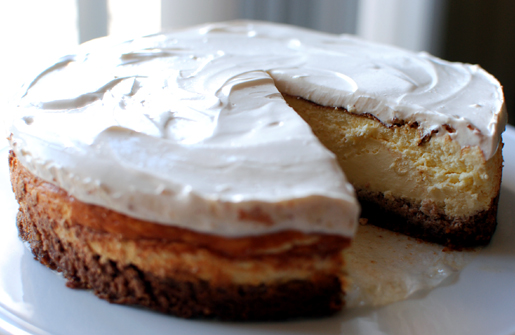 It is a pretty cake, not gonna lie. And it sets very well. I made it low-carb by using an almond flour/walnut/pecan crust and substituting the sugar with equal quantities of erythritol and baking Splenda. As always, can't tell it's low-carb. At all. The natural sugars in the strawberries work alongside the low-carb cake really well.

So much baking lately. I'm not sure what's gotten into me.

Probably a complete lack of motivation to do anything legitimately productive. Though I suppose it's better to exhaust my desire to bake before finals start, right? 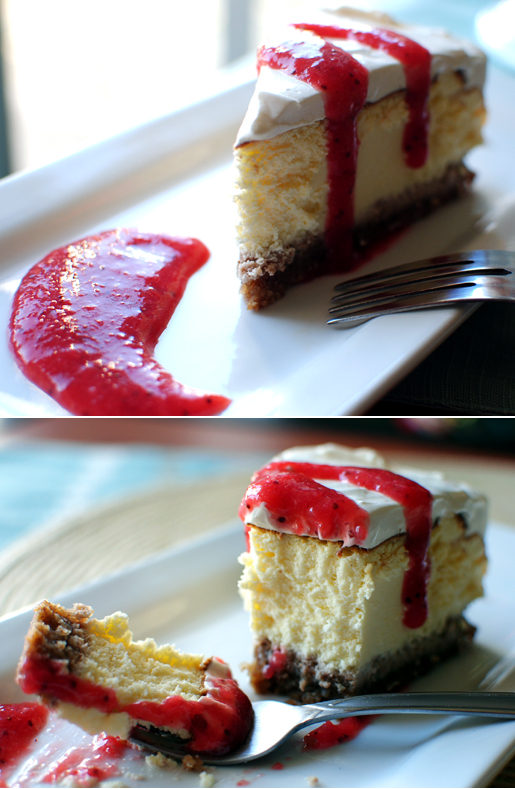