There are many things I love about Europe: the food, the weather, the shopping, what have you.

But perhaps one of the things I love the most is the beauty. 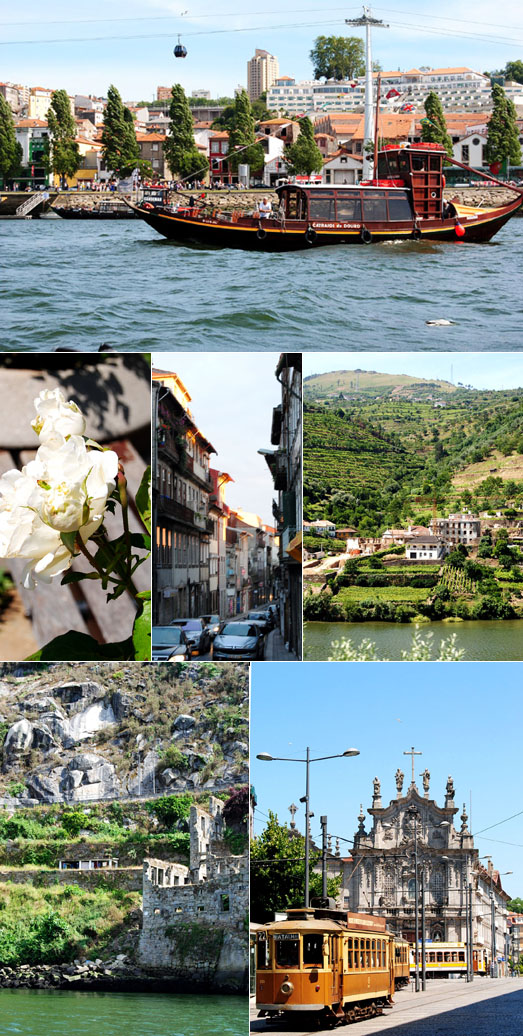 It's not even a particular type of beauty, which is the real, well, beauty of it. It's the change, the diversity, the ability to go from paved streets to cobblestone paths, from colorful buildings to terracotta roofs, from bustling city to quiet country, in the blink of an eye.

Liz and I spent this past weekend in Porto, the second largest city in Portugal. We initially had hoped to visit Lisbon, but were unable to get plane tickets there, and, well, the rest is history.


Given the chance to turn the clocks back, I'm not sure we would pick Lisbon anymore. 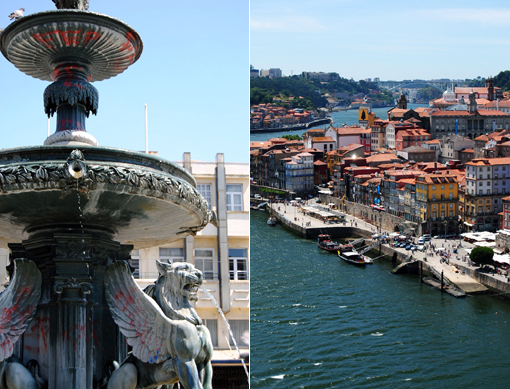 Porto is an absolutely gorgeous city, but I was immediately stuck by how different it is from Valencia. Though they're both pretty major cities for their respective countries, everything from the architecture to the ambiance are completely unique, in a way I wasn't totally expecting. Streets are narrower, more uneven due to the ragged stones they're made of, sloping upward and downward, with tall buildings towering each side. And yet, upon walking just two or three miles from our hostel, we came upon the Douro River, a major river of the Iberian peninsula that stretches from the Atlantic well into Spain.

We both literally gasped when we reached the bridge overlooking the river, essentially dividing the city into two. 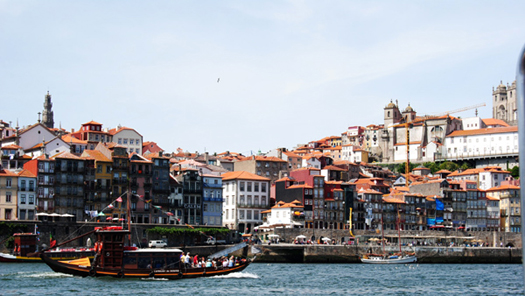 I'm happy to say that I'm now hopelessly, helplessly, head-over-heels in love with the Douro River. We took a cable car down from the bridge to the ground level, and from there hopped on an hour-long boat ride along the river with Porto on either side of us.

I would recommend you visit Porto to see this river alone.

But I suppose a bit of Port wine wouldn't hurt, either. 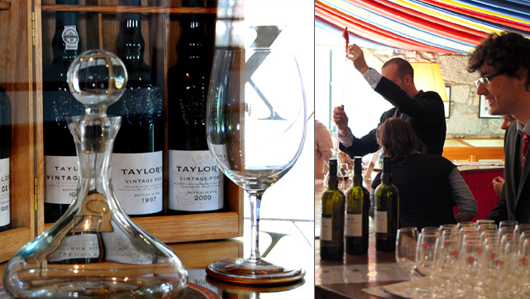 Port wine is produced exclusively in the Douro Valley, and so there are tons of wine cellars located throughout Porto along the river. Consequently, after our boat ride, we trekked up the hilly streets to the wine cellars, Taylor's Port in particular. Unfortunately, by the time we arrived, both the tours and the taste-testing had ended for the day [man, I was really looking forward to mooching off of the cheese plate].

Nevertheless, I'm sure Porto draws a huge crowd of wine enthusiasts, since the dessert wine here is supposed to be the best.


Our first two days in Porto were spent primarily exploring the city. To our dismay, Friday [our first and only one of two full days in the country] was a national holiday: Portugal Day, in fact, and thus everything was closed. So we decided to get all of our sight-seeing done, and did a pretty good job of it. River, boat ride, thrift shopping [more fleur de sel! because clearly I am in dire need of an inordinate amount of the stuff], and, of course, eating. 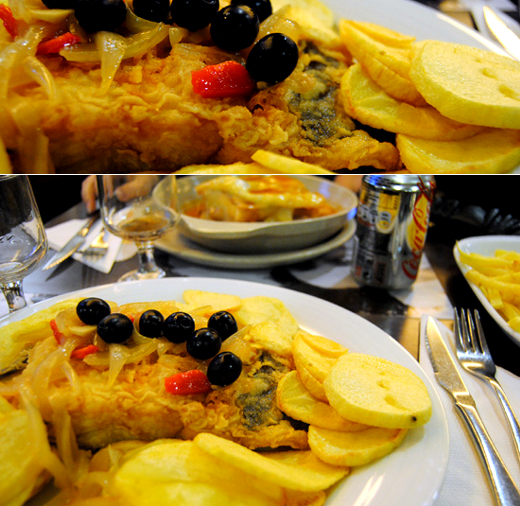 Our first night in Porto, the amazingly sweet receptionist at the hostel [also someone I more or less fell in love with after he whipped out fluent English upon seeing my look of utter confusion when he began speaking to me in Portuguese] recommended a bar in the University plaza. So, of course, knowing absolutely nothing about Portugal nor Portuguese cuisine, we headed over immediately. I ordered fried bacalau and Liz ordered francesinha, a dish that he had recommended as well. One word: ñamñam.

[Francesinha is basically a grilled breakfast sandwich filled with ham and cheese, topped with a fried egg, and doused in a beer sauce. 'Nuff said.]

One dinner and two incredibly stuffed bellies later, Liz and I decided to take it a bit easier the next day and prepared our own picnic for lunch in one of the parks around the city.

Sandwiches and yogurt for lunch, and homemade tuna salads and bread for dinner [I reiterate the above sentiment regarding María's cuisine].


It was a delicious first two days in the country, though we were somewhat unsure of what to do for Saturday. Which was spent, for the most part, on a train.


But let me just tell you: the five hours we spent on this train were some of the most incredible of my life. 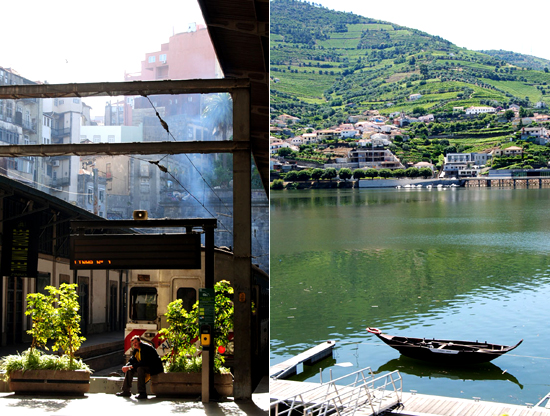 The view that we had on this train was unimaginably magnificent. We were heading to a small little town called Pinhão, situated in the heart of the Douro Valley, where all of the port wine vineyards are located. And we rode right alongside the Douro River, blessed with an astonishing look at the valley the entire way through.

We also met some very sweet gentlemen on the trains. The first was an Indian man who helped us figure out that we would actually have to get off the train and switch over to a new one, so we wouldn't stay put like fools while everyone else sped off toward Pinhão [I won't even tell you how many close calls we had this weekend, from catching our plane(s) to getting on the correct trains and metros, but it was a lot]. He ended up sitting right behind us on the next train, so we chatted until he got off for work two stops later. Mainly about what we were doing in Porto/what he was doing in Porto [a conversation is easy to start with a stranger when the question that hangs on their tongue is, "are you Indian, by any chance?" (the answer is always "no, I'm Pakistani, but I can understand why you'd ask!")], but also about the differences that Liz and I had observed between the Portuguese and the Spanish. Namely that the Portuguese seem so quick to help us out of binds, whereas the Spanish seem much more lost in their private worlds.


Though, the issue was put into perspective, a little bit, when he told us that he notices this sort of thing whenever he goes somewhere new, and really it's just a matter of hesitation. Someone hesitates to speak up and help someone else understand the bus system, or strike up a conversation with two young women traveling happily, albeit somewhat naively, through Portugal. In the end, it's the decision to hesitate or speak up that makes the difference, but that decision is so influenced by culture that it does well to remember that hesitation never necessarily means a lack of care. Few things do, really.


It was a lovely conversation.


The second was with an elderly French man, traveling through the Douro Valley on vacation ["I am retired now, so I decided to buy a second home in Portugal," he laughs, "Why not?"]. This man was absolutely charming, and asked me if I was from Mauritius, a country that I know absolutely nothing about short of that it appears in Model UN conferences [clearly, I still have a lot to learn about the world!]. I was both baffled and amused, though he supplemented his question by telling me that I reminded him of the women who live in Mauritius, and as such, that I am "very nice." So, in this case, I'll let it slide. 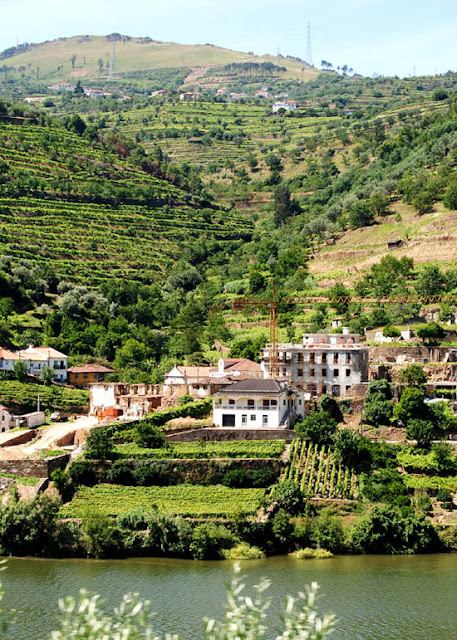 Pinhão itself, aside from the view [the town sits right on top of the river!], was not terribly exciting. We stayed for two hours and spent most of our time eating a delicious lunch outside, with the river in full view from our table. So even though there was little to do in the town, the lunch we had is one that I will never forget. 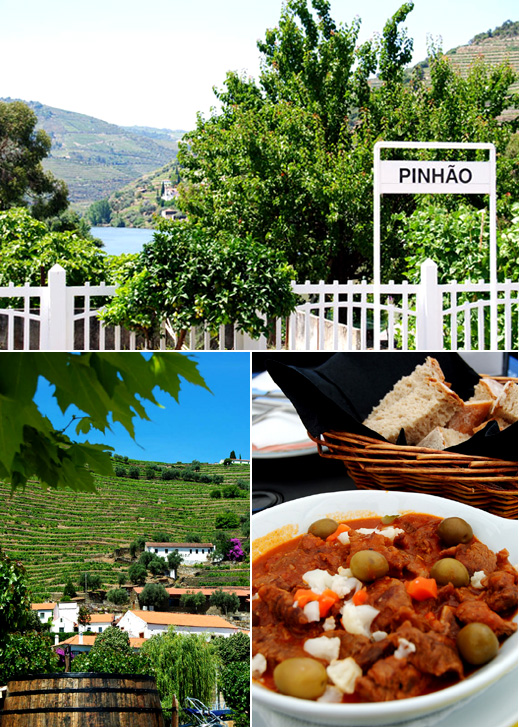 Chicken salad for Liz and Pica Pau for me, which, although sounds like an attack you would select in Pokemon Yellow, is an incredibly rich beef stew topped with a garlic and tomato sauce. Delicious beyond words.


After our leisurely lunch, we took the train back [I enjoyed the view for about 30 minutes and then promptly fell asleep, which was both unfortunate and also unsurprising (I was exhausted!)], and made it to Porto just in time to visit the Livraria Lello. The Lello is one of Europe's oldest and most beautiful bookstores, quaint and hardly noticeable along Porto's busy streets, almost like a hidden gem.


But one that is too beautiful to pass up.


Neither of us actually bought anything, 1) because almost everything is in Portuguese and I hardly understand an ounce of the language [Liz, though, has been taking it for two semesters so more than likely would have been able to get by], and 2) because I'm poor. Nevertheless, I did see some titles that I hope to look into when I'm back in the States [particularly The Double, by Jose Saramago].


And I really would have bought a Portuguese cookbook if it weren't so heavy and also weren't written in the metric system.


And believe me, I would.


Not to mention I'd be able to read some of my mom's old handwritten recipes.


This also begs the question of why I just can't sit down and learn and/or convert metric units, but it's the principle of the matter!]

Our final stop in Porto was the Museu Nacional de Soares dos Reis, an art museum in the city. I had never been exposed to Portuguese art before, and some of the artwork I saw at this museum were the best I've ever seen. It also catered to an artistic style that I love, so I was extremely happy.

The museum features the work of António Soares Dos Reis [hence the name], and for good reason. He is known as the "Michelangelo of Portugal," and his sculpture work is the best I've seen since admiring Bernini's work in the Borghese Gallery 3 years ago.

All-in-all, one of the best weekends of my life. It helps when you're already in Europe and it's actually feasible to spend a 3-day weekend in another country.


It also helps when your amazing travel buddy loves art, culture, food, and beauty as much as you do. Especially when said travel buddy also happens to speak a little bit of Portuguese, and you realize, in retrospect, that you probably would not have been able to survive on your own without her. So thank you, Liz, for sharing this weekend with me. :) 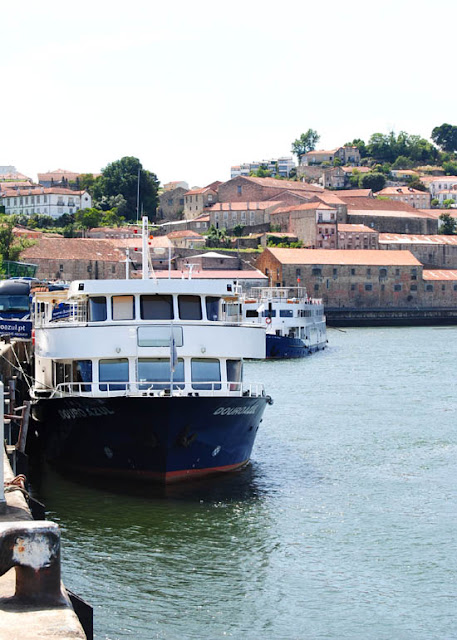 I can't lie and tell you, though, that it's not nice to be back in Valencia. In fact, as soon as I stepped foot off of the metro, I was struck by how much I appreciate the familiarity of this city. I was also struck by the realization that I have become so familiar with it. Makes me dread the day when I'll have to leave it behind, but there's no need to think that far ahead just yet.


After all, I've still got two weeks left to spend here.


And that means two weeks left to buy more marmalade.
Posted by Sabeen at 6:36 PM